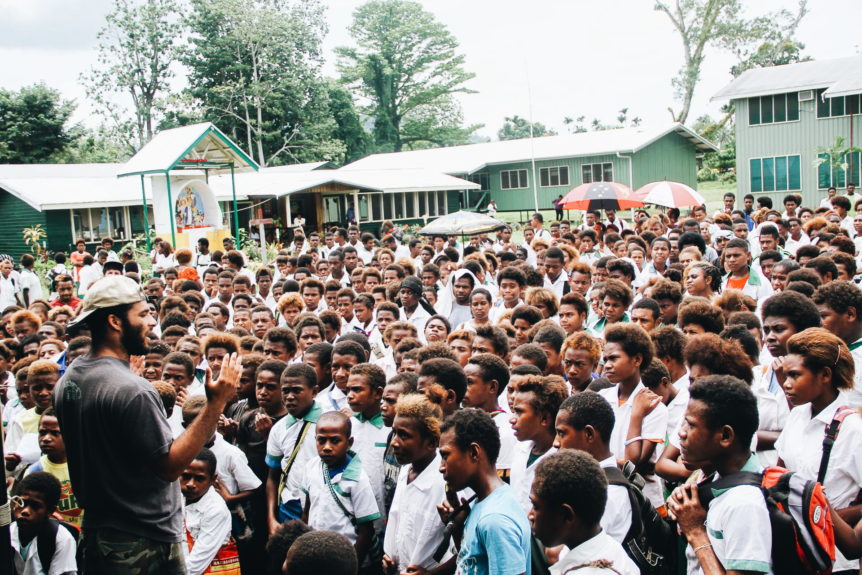 When our outreach team left YWAM Ships Kona’s vessel, the m/v Pacific Link for another day of ministry, it was already hot. That’s pretty normal for October in Kimbe, Papua New Guinea. Even the local people sometimes complained about the temperatures.

At first, our plans for the day had been tentative but we eventually decided that we’d visit the waiting room of the local hospital, a place we’d been a number of times before in the past four weeks. It was one of the nicer hospitals in this area of PNG. The spacious lawns between the hospital buildings were well kept and flowers bloomed alongside some of the sidewalks.

Previously, we’d prayed for patients in the various wards including the pediatric ward.Today we headed to the waiting room. People filled the place and we asked God to work through us as we prayed for the patients.

I couldn’t forget a mental image I had earlier in the morning as we were seeking God for the day during our team prayer time. As we prayed, I saw in my mind’s eye, a white portal opening up and streams of white smoke coming from it straight to people’s mouths. I assumed the smoke represented God’s healing power but wasn’t sure if it was spiritual or physical healing.

We approached different individuals and asked if we could pray for them. Many did not speak English and so when we couldn’t figure out what they needed from their pidgin words, hand motions and “sign language” had to suffice.

We watched in amazement as physical ailments began to respond to the power of Jesus Christ. Before long, we had a line of people waiting to receive prayer.

Bertha had come to the hospital, with a neck so stiff, she could hardly move it. I laid my hands on her and began to pray and was astonished when after only a few moments, she began to whip her head back and forth, declaring she’d been healed.

Another man demonstrated partial paralysis on his left side. A couple of our team members prayed over him. They urged him to stand and walk back and forth while they continued praying. By the time they finished, he was moving the previously paralyzed arm freely and his limp had improved.

Michael suffered from deafness in one ear. Team members prayed for him and then tried to communicate to him that he should plug his good ear and see if he could hear from his bad ear. Since Michael didn’t speak English, he couldn’t seem to understand what we wanted him to do. Eventually, however, he indicated that he was able to hear one of the team members snapping their finger next to his previously deaf ear.

Antonia said she had fallen and hurt her back. She was in some real pain. Someone also noticed her eyes were covered with a film that indicated the presence of cataracts. Her husband affirmed that her vision was poor. Serena, a team member, stepped out in faith and began to pray. Some moments passed before Antonia jumped up with excitement, saying the pain was gone from her back. Someone also noted that the cataract film covering her eyes seemed to have lessened as well.

We counted sixteen people who had received prayer and healing during that morning of miracles.

This was not the first time our team had seen miraculous healings during our outreach to Kimbe. About a week after we arrived, we went to the local open air market where many people come and set up under large umbrellas and tarps to sell their wares–from toiletries to fresh produce. We planned to talk to whomever we felt led, hoping for some divine appointments.

Around noon, we sat down to eat our lunch. One gentleman came over and began to talk with us. PNGers are curious, friendly people and a crowd soon surrounded us. We felt like God had opened up ministry time for us so Daniel pulled out his guitar and began to lead worship. I encouraged the people with a word from the Lord and we wrapped things up by asking if anyone wanted prayer.

Luke, an older gentleman, came up to us. Cataracts had blinded him, he was partially deaf and suffering from a cough. He was a strong Christian and wanted us to pray for his healing.

We prayed, laying this man before the Lord and asking for the healing he so badly wanted. When he opened his eyes after the prayer, Dani, another of my team members, was amazed to see that Luke’s eyes were completely clear. Luke also declared he could hear better.

During my time here in Kimbe, I have learned just how much God really does care about the people of PNG. It has truly been a blessing to be used by Him to bring healing of body and soul to the people of this nation.